Umbrella Samurai is an “endless” falling game. The goal is to “fall” as far as possible in order to increase your final score. The player can cash in their current score by STRIKE-ing the Dark Lord down. Currently, the Umbrella Samurai is being distributed by FGL. 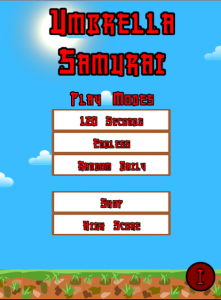 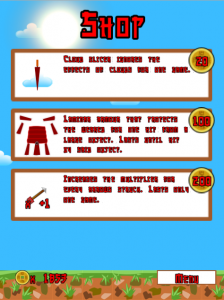 Work in progress version can be found following this link.
Umbrella Samurai

Omen Leaked is a cooperative table talk story telling(RPG). A focus on on players creating one part of the story while everyone else playing up the roles antagonist and protagonists through the evening play.  Omen Leaked derived on the principles of classic Pen and Paper Role Playing.

Omen is the fictionalized world behind the veil. Where the supernatural being hide in the shadows. Actors take up the roles of investigators of the Omen Agency. A organization to keep the balance between world that the humans see and the one they don’t.

Omen Leaked was written by Jason Jarvis with the beautiful art done by Deems Morrione. Leaked will be releasing soon and free.

Greatly inspired by the classic arcade game Joust. Draoust is nostalgia personal take on the old 1982 favourite.  Currently in development for release on the  Ouya for 2015 and approval pending will come to other consoles. For now you can check out an old video of still in development version.

And our original Ouya Jam video. The  game has been a while in development.